Home » Technologies » Sora, an indigenous language from India, is getting a new typeface · Global Voices
Technologies

Sora, an indigenous language from India, is getting a new typeface · Global Voices

The Sora (Saura) script Sorang Sompeng and its equivalent Odia and Latin characters. Image via Wikipedia by Hpsatapathy. CC BY-SA 4.0.

Sora is an indigenous language that is spoken, according to the 2011 Indian Census, by about 409,549 people in parts of the eastern Indian state of Odisha and the neighbouring state of Andhra Pradesh. Latin and Odia alphabets are used for Sora along with Sorang Sompeng, and its limited usage is partly explained by the competition with those two majority writing systems.

The Sorang Sompeng or Sora Sompeng alphabet was originally invented by Malia Gomango in 1936. His son-in-law Mangei Gomango was instrumental in promoting it by setting up a letterpress which produced many books.

The alphabet has been used primarily in religious contexts, and that is still the case for those who practice the traditional Sora faith. But as many Sora speakers converted to Christianity and Hinduism over time, and the Bible and other religious texts were translated using Latin and Odia, Sorang Sompeng was gradually sidelined.

In 2012, the alphabet gained a boost by its inclusion in Unicode, a universal encoding standard that allows seamless and cross-platform use (unlike predecessor encoding standards, such as ASCII).

Also in 2012, Salma created her first typeface for Sorang Sompeng, which is now broadly used in print and digital publications despite its low overall adoption.

She hopes her new typeface, which will be available in November 2020, will boost the use of this alphabet among native speakers even more.

Most indigenous communities such as the Sora are under-resourced; only a few can count with experts like Salma. Efforts such as hers help communities to preserve oral knowledge in written form and use the internet to exchange knowledge in their own languages.

On behalf of Rising Voices, I interviewed Salma to learn more about her work in supporting the Sora community.

Subhashish Panigrahi (SP): Tell us more about your journey to create the Sorang Sompeng typeface.

Sony Salma (SS): First of all, I belong to the Kondha community of Odisha and I am not a native Sora speaker. I got curious after learning about the Sorang Sompeng script and started creating a digital font back December 2012. With no prior experience in type design or any contact with other type designers, I did my own desk research online to learn the basics of type design. I put that to use and referred a Sora book for inspiration that was printed in letterpress. I traced the visual style of the characters and placed them on an existing OpenType Font (OTF) by replacing the existing glyphs. The font was mapped on the American Standard Code for Information Interchange (ASCII) encoding which is outdated now. In the last eight years, the font has been used by the Sora people for printing books, calendars and invitation cards.

As a Masters in Design student at Indian Institute of Technology (IIT) Bombay, I got the opportunity to work with noted typographer and type researcher Prof. Girish Dalvi, and I am currently working on a newer version of my old typeface under his guidance.

A computer keyboard with stickers of Sorang Sompeng characters pasted on keys to help users for typing in Sorang Sompeng. Image by Sony Salma (CC-BY-SA 4.0)

SP: Tell us more about the tools and other resources used for Sorang Sompeng.

SS: The typeface that I made back in 2012 is used by many on their computers. Google’s Noto Sans Sora typeface is underway and existing cross-platform input tools like Keyman Sora Basic keyboard can be used to type in Sora. Meanwhile, I invited some of the community experts to review my second typeface, and it is going to be available soon. The Sora community will soon have multiple good quality and modern Unicode-compliant typefaces to choose from.

As a majority of the mobile users are on Android devices, having Sora included in the popular Gboard app would see more mobile use of Sora, especially among the young speakers. Many users currently find it hard to install the Keyman mobile app due to its multi-step app installation process. 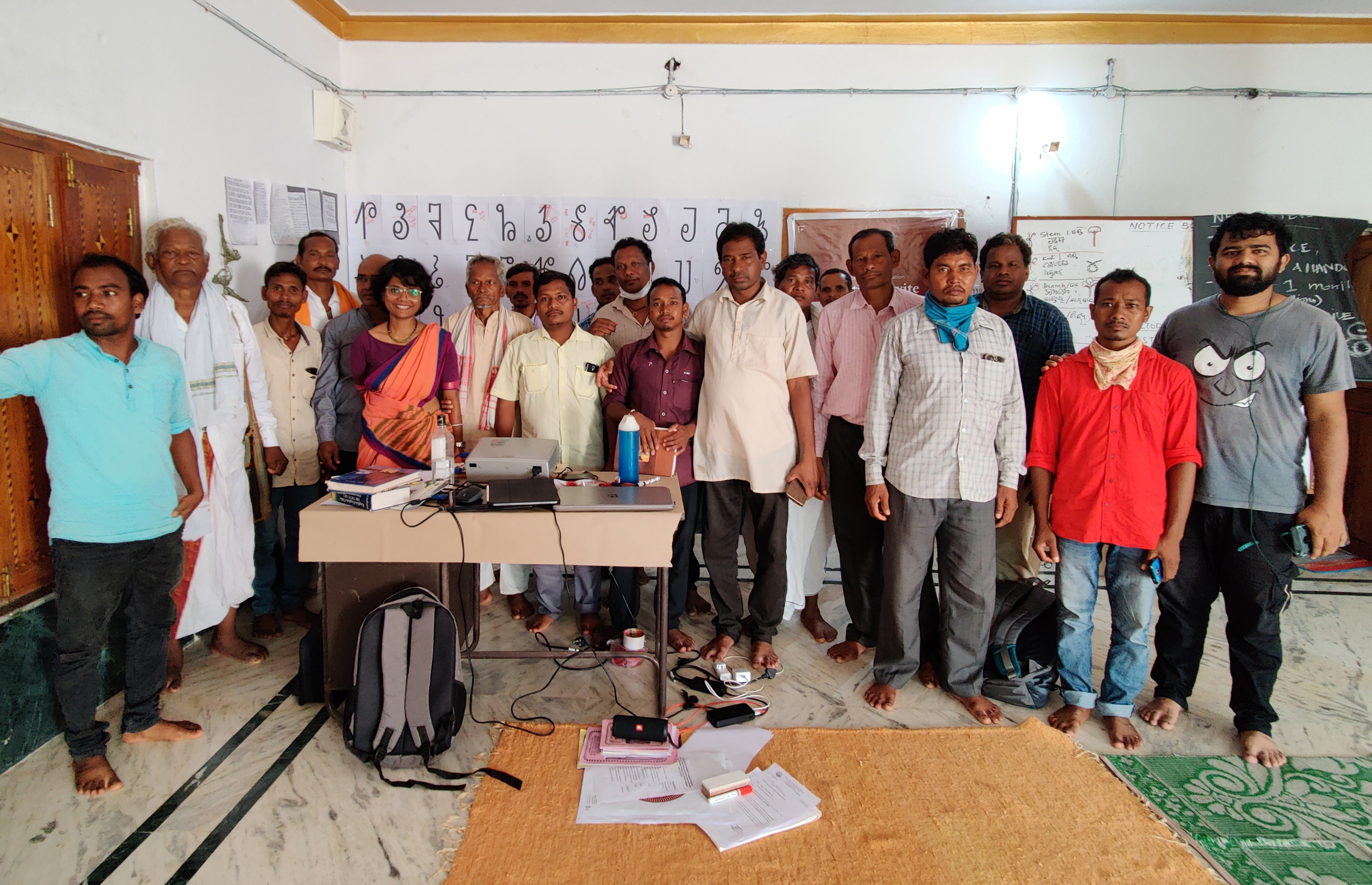 Participants of a recent meeting organised by Sony Salma to collect feedback on her upcoming typeface. Image by Sony Salma (CC-BY-SA 4.0)

SP: Could you explain how decisions related to the Sora language and its writing system are made?

SS: Though it is hard to say much about any organised or centralised decision-making process, there are multiple organisations which are working for the promotion of both the language and the writing system. One of them is Matarvanam Vigyan Prachar Ashram that is headed by Dinansmi Gomango, son of Mangei Gomango. There are probably other initiatives by the Sora diaspora in the neighbouring Andhra Pradesh.

SP: How is the language taught and what are the challenges in promoting it? What can help to improve that?

SS: Most efforts to promote reading and writing in Sora are by a handful of individuals and organisations that are under-resourced and have limited bandwidth. They have designed books for learning the Sorang Sompeng alphabet, numeral system, folklore and poems. Some Sora teachers also try to teach Sora to young Sora speakers outside the school curricula.

The success of these efforts can be in multifold if combined with policy-making such as the recent National Education Policy 2020. The policy emphasises on the use of mother tongue or local language as the medium of instruction untill the fifth grade and recommends continuing the same untill the eighth grade and beyond.

High-quality educational content in Sora in all mediums — print, audio, video — will be needed to implement this policy. This requires the policy-makers, educators, designers, and even informal systems like Anganwadi to work together.

SP: What are your plans to engage the Sora people going forward?

SS: Just digitising the script is never enough. So, I wanted to help the Sora people to document their culture and traditional practices including the use of different herbs as medicine, recipes, and their ways of farming. I want to build or explore a platform to create a knowledge repository of the Sora community. I also want this data to be collected by people in the community. I am personally keen to find a way to annotate this data and use it for training Machine Learning and Artificial Intelligence models to further the development of advanced linguistic tools.