Photo by Jordan Harrisson on Unsplash. Published under Unsplash’s license.

This post was originally published on Azerbaijan Internet Watch and is reproduced here under a content-sharing agreement.

As intense fighting between Armenia and Azerbaijan continues, Azerbaijani authorities announced on September 27 that it would start restricting internet access across the country. Internet users have reported difficulties accessing social media platforms and communication apps in the past days.

Clashes between the two countries, who have conflicting claims over the mountainous region of Nagorno-Karabakh and its seven adjacent territories, broke out on September 27. Both sides have reported casualties. Azerbaijan, who previously claimed it had retaliated shelling along the Line of Contact, said on the following day that its forces had seized control of up to seven villages.

While international stakeholders have called for an immediate end to violence and a return to the negotiation table, neither side has so far demonstrated interest.

At around 10 a.m. local time on September 27, the Ministry of Transportation, Communication, and High Technologies issued a statement saying it had limited internet access “in order to prevent large-scale Armenian provocations.” 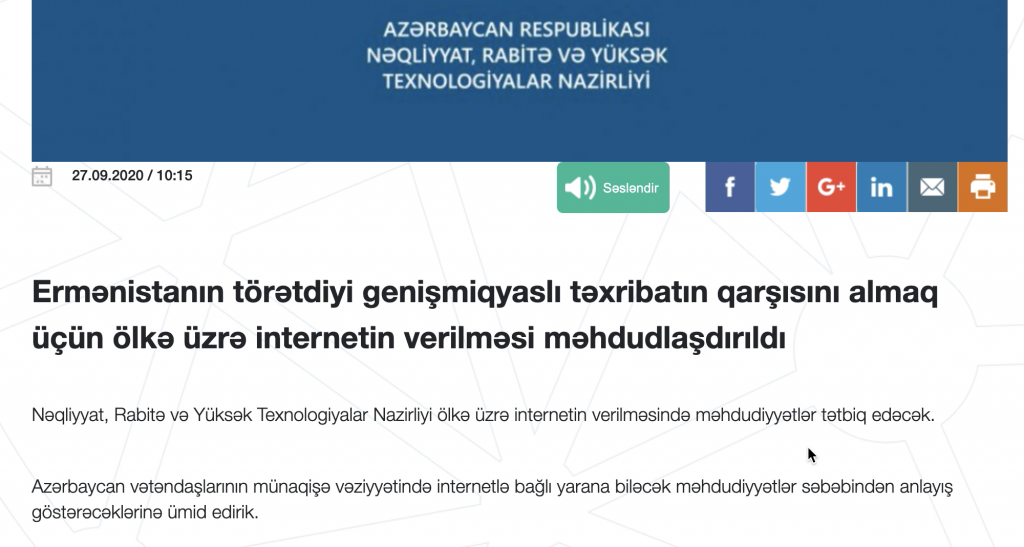 Statement by the Azerbaijani authorities dated from September 27: “The Ministry of Transportation, Communication, and High Technologies will be implementing limitations to internet access across the country. We hope Azerbaijani citizens will show understanding about problems that may arise as a result of the limitations during a state of conflict.” Screenshot from the government website.

Indeed, some internet users have said they were experiencing problems accessing social media:

Looks like they are only limiting access to social media platforms. There are no problems when accessing the Internet [sites]. It is possible to access other websites.

Issues accessing the internet could have begun even a day before. Hebib Müntezir, an Azerbaijani journalist with Berlin-based channel Meydan TV, posted on Facebook on September 26:

In Azerbaijan, internet users are complaining about internet speed. Many are saying it has slowed down and are having difficulties loading videos and images. What is the situation on your end?

At some point, all websites with gov.az extension went down on September 27.

According to Access Now, a digital rights advocacy non-profit that coordinates “Keep It On,” a campaign against internet shutdowns worldwide, “public safety, national security, or stopping fake news are commonly used to justify shutdowns.”

Data collected by the campaign shows a significant increase in the number of shutdowns in recent years. In 2019 alone, there have been 213 internet shutdowns in 33 countries, lasting a total of 1,706 days, Access Now has found.

In Azerbaijan, such restrictions aren’t new. In April, a leader of an opposition party has had his mobile and home internet services cut off ahead of a television interview. While disruptions are usually reported as a result of technical incidents, there are cases in which access is intentionally slowed down, especially around political events.

While some Azerbaijani users ponder that internet disruptions are necessary to prevent the spread of unconfirmed information, others say the government should not by any means interfere with access.

As of the publication of this story, access to government websites remains spotty, and users continue to report throttling of internet speed and access to social media platforms.