This post was first published on Yoti as a part of Subhashish Panigrahi’s Digital Identity Fellowship. It has been edited for Global Voices.

The world’s largest biometric ID system, Aadhaar, assigns Indians a 12-digit unique identity number which is tied to a range of citizen beneficiary services. The programme was meant to be a technological solution to both existing and emerging socio-economic challenges, designed to help ensure inclusion in India. In practice, however, it has done the opposite, deepening the exclusion of marginal and vulnerable communities.

Aadhaar began to take shape in 2009, when the Indian National Congress (INC) was in government, but saw aggressive implementation under the Bharatiya Janata Party (BJP), currently in office, which holds a majority at the federal level and wields strong influence in many provinces. The system has therefore been used in both federal and provincial public programmes on a massive scale, but exclusion persists.

It was hoped that, after a decade of Aadhaar, issues like the country’s long history of racial oppression — which existed long before British colonisation and continues long after the country became a democratic republic in 1947 — would be addressed. Instead, many marginalised communities find themselves in a multitude of troubles, unable to access basic amenities and services.

Conversations with members of several such communities — as part of research conducted for the MarginalizedAadhaar project (see Field Diaries #1, #2 and #3) — indicate that the most marginalised among them have been further excluded as a result of the absolute trust in ‘tech-solutionism’ displayed by several state entities.

However, the technological biases that have come out of the systemic social oppression in Indian society — especially in the context of Aadhaar — are yet to be addressed.

When viewed through the lenses of different demographics — social, political, economic, regional, linguistic, religious, and most importantly, access to privileges for those at the bottom of the pyramid — one can only grasp a tiny portion of what a national biometric-based identity system like Aadhaar means to citizens.

By their very nature, ID systems need to allow for social inclusion and the rights of individuals to address issues across the spectrum — from widespread inequality to the nuances associated with the Adivasis, especially the Particularly Vulnerable Tribal Groups. If they do not, people with privileges but with no understanding of diversity and inclusion, end up building ‘tech-weapons of mass exclusion.’

For instance, Aadhaar has been deployed for biometric-based authentication in the distribution of food rations through the Public Distribution System (PDS), a federal government initiative that provides food and other essential commodities to those in need. The objective, of course, is to eradicate poverty, but data from the country’s census showed that between 2001 and 2011, the number of people in need rose from 21 to 26.8 million, a 22.4% increase.

Technology, particularly in India, cannot be discussed without bringing up systemic racial discrimination. The country’s political power dynamics are much more racially divisive than ever before, to the point where they have now become part of the apparatus for exclusion.

The caste system divides people of the Hindu faith into four major classes, of which some are considered outcasts, or ‘untouchables’. These communities are collectively known as Dalits in progressive discourses; in India’s constitution, they are classified as Scheduled Castes (SC).

The BJP, the ruling right-wing nationalist party dominated by “upper-caste” Hindus, has been pushing to exclude the Dalit, Muslim and Adivasi people — and several other marginalised communities — through divisive policies. From a human rights perspective, the technological implementations of these policies often translate into inherent and serious design flaws. 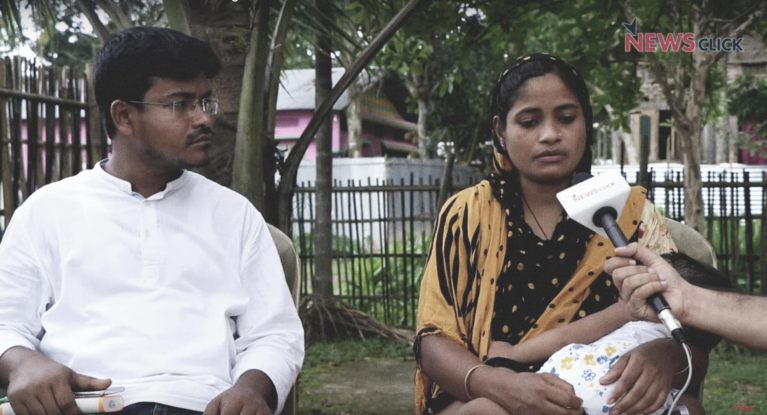 A Muslim woman in the state of Assam who was declared as a “Doubtful Voter” in the National Register of Citizens. (Screengrab from a video reportage by NewsClickin. CC-BY 3.0).

Curiously, in a country where there have been no less than 402 documented internet shutdowns since the BJP came to power in 2014, the Aadhaar system relies on the internet to function. People wanting to get food rations must authenticate their identity via a fingerprint-based process, and authorities at the ration centres use an online portal to verify the information.

Just as concerning is the fact that as many as 104 million Adivasis, already largely excluded because they come from low-income groups, are further sidelined because they cannot find any information about Aadhaar in their native languages.

In the following video, Sora-language speaker Manjula Bhuyan from Odisha, India, highlighted the importance of accessing information about digital identity in one’s native language. Downloadable videos with captions and transcripts can be accessed here.

The impact of this systemic bias is broad. It ranges from Dalit and Muslim schoolchildren from low-income families being denied scholarships because of Aadhaar system errors, to Muslim citizens being harassed and asked to provide proof of citizenship.

Muslims in the state of Assam have been among the hardest hit — 1.9 million of them out of the state’s population of 33 million were declared illegal during the National Register of Citizens (NRC), a programme designed to eliminate illegal immigrants.

The video below says that the state of digital identity took a critical turn when these 1.9 million people were declared illegal. Downloadable videos with captions and transcripts can be found here.

The NRC exercise came to a momentary halt because of the COVID-19 pandemic, but new waves of terror began to unfold among those who have been declared illegal.

Ashraful Hussain, an activist who works closely with many discriminated Assamese Muslims, recently noted, “Most Muslims — and even many Hindus of [West] Bengal origin — were purposely excluded in the ‘original inhabitant‘ category by the officers who were in charge of the NRC drive.”

The 1.9 million people whose names were left out of the list of “legal citizens” have one last option — appearing before what’s known as a foreigner’s tribunal to prove their citizenship in a judicial process.

Hussain fears, however, that even though these already marginalised people are becoming poorer as a result of lockdown restrictions, they will need to pay the legal costs associated with having to prove their citizenship once COVID-19 restrictions are lifted — and the exclusion goes much further. According to Hussain, “As many Muslim women are illiterate and are unable to find documents to establish their parental link, these women and their children are out of the [NRC] list.”

The NRC is deeply linked with Aadhaar. As attorney Tripti Poddar explained, the collection of individuals’ biometric data happened during the NRC process. Those who made it to the NRC were issued Aadhaars; those who did not were denied. Poddar further argues that even a foreigner residing in India can receive an Aadhaar, but Indian citizens flagged by the NRC can be stripped of their constitutional rights.

Stanford Reverses Plans and Decides to Deliver All Instruction Remotely