Chhattisgarh state, located in the centre-east of the country, has the lowest internet penetration in India, making it hard for people to access traditional media online — but an online citizen journalism portal led by Shubranshu Choudhury has, since 2010, been helping to solve the problem. In a region that is typically ignored by mainstream media, CGNet Swara makes it possible for the indigenous people of Chhattisgarh to share local news using basic mobile phones.

Thanks to the innovativeness of CGNet Swara, villagers in central Gondwana are now using Bluetooth, which doesn’t require internet or mobile network, to connect and share news, music and other entertainment files with people in their communities:

When @CGnet_Swara’s team learned that villagers in #India’s remote Maoist region were using Bluetooth to share music, an idea clicked — could they also use it to share news? So they created an app & recruited #citizenjournalists to do exactly that. Read: https://t.co/I7VHfSo9hZ pic.twitter.com/LQqjjzWoxC

From mainstream to hyperlocal

As the South Asia producer for BBC TV and Radio during the 1990s and early 2000s, Shubhranshu Choudhary realised from his travels in the region that frustration with issues like poverty, lack of health care, unemployment and crime was leading people in his home state, Chhattisgarh, to join the communist Naxalite–Maoist insurgency. Far-left radical communists accused authorities of not addressing their demands and engaged in armed conflict with the state governments, persuading discontented villagers — who wanted to be heard and taken seriously — to join them.

Leaving the BBC to go and work in Chhattisgarh, Choudhary joined a Knight International Journalism Fellowship to address issues of media disenfranchisement in the region. He immediately saw the need to develop strategies to overcome the slow internet connectivity and reach the local tribal population, many of whom were illiterate and only spoke their native languages.

This is how CGNet Swara was born. Choudhary developed the cell phone-based news and current affairs portal with technical expertise from Microsoft’s Principal Researcher Bill Thies, and Microsoft Research India launched the service in 2010.

Choudhary trained people from the local community to produce audio news reports using their mobile phones; since then, thousands of articles have been produced, especially in local languages. Users themselves decide on the topics, which range from local land issues, sanitation and health, to crime and human rights:

In the eight years since its launch, CGNet Swara, a voice portal for internet-bare rural India, has logged over a million calls and published more than 10,000 reports. https://t.co/wAtkrmcR6W

To use the interactive voice response (IVR) service, users call a toll-free line and record their message by responding to prompts like “Press 1 to record a new message”. Afterwards, a group of professional journalists accesses the system, using a web-based interface to review and verify the report. Once approved, the reports are made available for playback over the phone, as well as on the CGNet Swara website for a wider audience.

The arrival of the app

Once the IVR system was well entrenched, it was time for the next phase of development. In 2014, Krittika D’Silva, then a student at the University of Washington in Seattle, USA, envisioned the interactive CGNet Swara app. As low-end android smartphones became cheaper and many villagers could afford them, this mobile application was designed to support interactive voice forums in which users could record their own messages (and listen to messages from other users). Useful features include the ability to upload photos via the internet and the offline playing of messages, which can also be shared by Bluetooth or via an SD card. 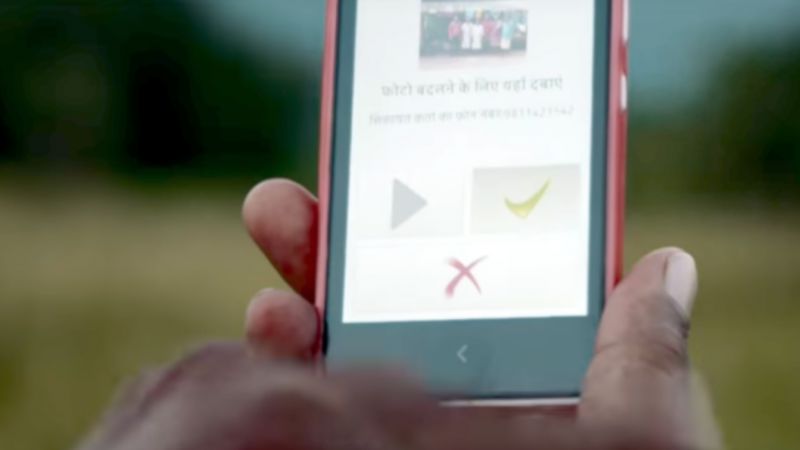 Launch of the ‘Bultoo’ (Bluetooth service)

The success of the voice version of the CGNet platform put the service in a financial crunch, as there were substantial monthly phone bills being incurred on the toll-free line.

One winter morning in 2015, Choudhary discovered that children were exchanging audio and video files via Bluetooth on their mobiles. When asked, they said that they were carrying out ‘Bultoo’. It was a breakthrough moment.

With the help of the Chhattisgarh government, Choudhary piloted the ‘Bultoo’ radio or ‘Voicebook’ programme in 2016, which encouraged users to record news on their phones, and to go to trained citizen journalists in their locality to transfer content via Bluetooth. Voice call submissions were no longer necessary, minimising costs. Messages were verified and then converted into internet-based radio programmes, and uploaded to the CGNet Swara website, where they could be downloaded for free. Once the programmes are downloaded and available as an audio file, a community media vendor (CMV) collects them, then goes house to house to deliver ‘Bultoo’ radio to each customer’s phone.

An improved interface was later launched, enabling the recordings to be easily shared via the app, using Bluetooth.

CGNet Swara also came up with an incentive scheme for the community media vendors to be compensated for their efforts, by enabling them to be credited with five Indian rupees (seven US cents) for every story they share through the app via Bluetooth, which they could later redeem.

Is Bluetooth-sharing the future of penetrating dark zones?

In 2019, despite the country having only 31 percent mobile phone internet penetration, India experienced the highest number of internet shutdowns, with more than a hundred monitored cases. Because alternative Wi-Fi and Bluetooth-based communication apps and channels are increasingly being used by activists and other communities that want a voice, CGNet Swara’s successful use of Bluetooth to share content can be widely replicated.

There is still a long way to go, however. The Android app is not yet available in the Google Play store nor is there an iOS version; you have to download it from the CGNet Swara website — but the NGO is currently researching whether this increased connectivity can help create a sustainable economic model.

WGU Provides Details on Its MicroBachelor: Successful Completion Does Not Mean Automatic Accreditation